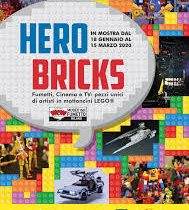 The "Hero Bricks" exhibition reopens until 02 August 2020. Comics, cinema and TV: over 50 dioramas and unique pieces created by artists in LEGO® bricks.

Invented in the late 1940s, LEGO® bricks are a worldwide phenomenon that fascinates and involves people of all ages. Alongside the traditional sets that can be purchased in stores, there is a true parallel universe of original creations made by enthusiasts, who use the legendary bricks also to recreate vehicles, characters and settings inspired by the world of cinema, comics and the imaginary.

The "Hero Bricks" exhibition exposes for the first time together more than 50 creations in LEGO® bricks that pay homage to the myths of comics, cinema and TV: from Batman to Back to the Future, from Marvel heroes to Ghostbusters, up to Tex and Star Wars. The unpublished path allows you to discover many curiosities about the works that inspired these buildings. There is no lack of insights that help the visitor to enter the history of characters, TV series and films.

Check our availability at prices at the best guaranteed rate